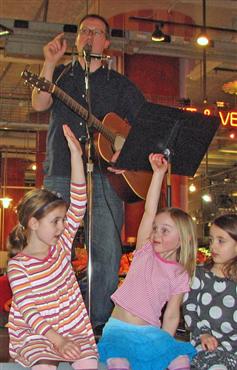 What is Snapdragon Seeds?

I created Snapdragon Seeds Music to play upbeat, fun educational music for kids.  My songs encourage literacy and teach rhymes,
patterns, synonyms, sentence structure, songwriting, movement and the intellectual power of asking questions. My mantra: keep learning because the world needs smart people. My goal is to perform in schools, museums and libraries.

I began performing children’s educational music at Minnesota Children’s Museum (MCM) in 2005.  Over the years I logged hundreds of hours performing two programs for museum visitors: Draw the Music and Music on the Move.

Since my initial success with educational music at MCM, I have expanded my clientele to include top organizations in the Twin Cities, including Twin Cities Public Television, Walker Art Center, Science Museum of Minnesota, Como Zoo, the City of Maple Grove and dozens of libraries spread over the seven county system.  I have also performed in New Ulm, Austin and several cities out of state.  Children’s Hospitals and Clinics hired me to write a song to promote handwashing.

Snapdragon Seeds was created in 2010.  To date, I have performed over 100 times to an estimated audience of over 10,000.  My main audience, children up to 12 years of age, is thoroughly engaged in the show and they play along with my interactive songs.  Parents, my secondary audience, are also very appreciative of the music, the educational content and my high-energy style.  Librarians also approve, with one librarian reporting that I blended literacy with music better than anyone she has seen in ten years.  Another librarian, after hearing my song Our Solar System, said, “I didn’t know Pluto wasn’t a planet anymore!”, thus proving my mantra: keep learning because the world needs smart people.

Our Solar System is a song about the planets.  After the Pluto lyrics, I sing, “Nine planets!  The Solar System has nine planets!”  I repeat this line until I see an older child in the crowd shaking their head.  The fun of performing this song is finding the person in the crowd that knows the song is wrong.  I stop the song and ask them what’s the matter.  Then something special happens.  It is exhilarating to see a child take the microphone and explain Astronomy to their peers. The song is designed to teach a lesson and give a young learner the opportunity to lead and teach.

In addition to a rockin’ set of awesome original music, I have created and implemented my own program, Songwriting ABC.  Songwriting ABC is an interactive songwriting workshop that gives children and their families the tools to write their own songs on the spot.  The participants are encouraged to create and lead the process of unique artful interactions, giving everyone a chance to inspire artistic creation.

Songwriting ABC has been performed at museums and libraries and I will offer the workshop to middle school students in St. Paul this spring. I see this program as a literacy tool that can help students convey their thoughts and reinforce lessons of the classroom.

As a little boy I remember being fascinated with music and at an early age I attempted to write poetry.  Since those early beginnings I have written over 100 songs and have been performing my original music for more than 20 years.  In 2010, my band i with us won a Guthrie Theater/ City Pages songwriting contest for our song, Rewrite Romeo and Juliet.

Music for kids, both silly songs and educational, is growing in popularity.  The educational genre suits me well, with a background in education and youth serving non-profits. I received a fantastic education and have discovered that I can quickly and cleverly write catchy educational songs.

Here is what people say about Snapdragon Seeds:
​
"It's a fun upbeat way to teach little ones synonyms sentence, structure and even songwriting. Snapdragon Seeds is rhyming its way into children's hearts and minds."
- Eric Perkins, KARE11 NBC TV, Minneapolis

​"As Steve began to play, members of the audience stood up and started to move to the music. Before long every child in the audience was up dancing to his catchy tunes. Even their parents couldn't resist tapping their feet to the beat."
​- Andrew Lovgren, Villager

"Steve is a great asset to the Museum. In addition to being very popular with our visitors he has helped shape the Draw the Music program into a strong, unique, mission-based program."
- Michelle Blodgett, Minnesota Children's Museum

Listen on iTunes
View on Mobile